Easily accessible by road. This beach is an enchantress of other beaches in Sindhudurg. In magnificent geographic combination the beautiful stretch of pristine shiny sand has given rise to equally alluring shallow blue water estuary that follows meandering course amidst ‘Jamdool Island’ . Estuary is paradise for swimmers, sunbathers and dolphin watchers. Dolphin season is between October and February. Cruising along it, reveals deeper charms of Achare such as viewing diverse, migrating bird species during season, indigenous birds like peacock . It is a few km ahead of Tondavali beach. There are some fishing activities around here but mostly it is a good space to chill with the sea waves. 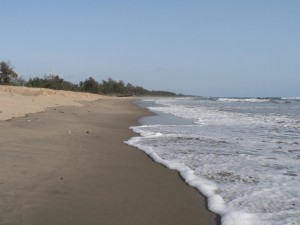