This is very famous temple . Various theories are viewed to explain the origin of the temple. One of them is that a cow belonging to one of the villagers used to discharge milk in the green wood which turned in a plaque. When the owner went out to look for the cow, he found the matter. On same day he got a divine message in his dream. He started to worship that stone of plaque. The word sprayed and people have since been visiting the place annually. Since the plaque was found in rocky soil (Bharad) the goddess come to be known as Bharadi.

The date of annual fair at Anganewadi, in Masure known as parallel Pandharpur of Konkan, is announced in February each year. The name Anganewadi indicate predominance of people with surname Angane. According to a legend a goddess materialized in village in the form of a stone plaque, 400 years ago. Since then people have been flocking to a village for ‘Darshan’, every year. There is no fixed day or date for the fair. It is decided by consents.

Although Anganewadi is a part of Masure village, a dispute between Devasthan committees of the two places led to the separation of Anganewadi from Masure. Yet that they are attached by faith in the goddess. 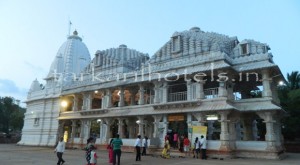