This is one of the most commercially active beaches in the Konkan. It is buzzing with life at the jetty where most of the fishermen anchor their boats of various dimensions and colors. There are a few bars and restaurants on the beach unlike most other seashores on the Sindhudurg coast. It is one of the friendliest atmospheres alive with banter among the locals.

This beach is not a place for relaxation, however, it is close to the city centre and perhaps the most accessible beach in the area. Another promising forthcoming attraction here is a one of its kind marine park in Asia. The government has proposed the marine park since 2000, but there has not been any action on it yet. The area of Malvan is a fortified island on the coastal reef. Coral patches have been recorded in the interstitial regions around the Sindhudurg fort. Most of these marine flora and fauna from the inter-tidal area is exposed during any low tide. So keep an eye out for a great opportunity for scuba diving. However, for now the best attraction on this beach remains to be the Sindhudurga fort. 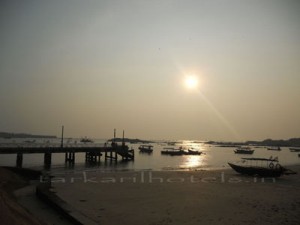