Sindhudurg fort is constructed  by Chhatrapati Shivaji Maharaj on a small Island called ‘Kurte’. It was the period of 1664. Considering direction of the wind & force of the rain water, using  500 Khandis of lead were bought, melted & sprayed at the base of the rampart. Near 4000 workers & 100 Portuguese toiled at the site under the vigil of 5000 Mavals (loyal). The stones of boulders required for the work were brought from far away Phonda & Amboli.

The circumference of the fort measured near about 3 Kms. The fort built on 48 acres of land. For construction of fort, lime is used for joining huge stones of boulders. The fort has 52 bastions. The fort barrier of the entrance is so skillfully made that the outsiders wanting to enter the fort does not come to know the existence. The entrance barrier (the main gate) made of the hardest type of wood (oomber), is 9 ft in height & 3.5 ft in width. Above that is Nagarkhana (built by Shahu) where drums were played to naval important events. The main barricade leads between two bastions. The left side bastion is 20 ft in height & the right one is 40 ft in height. To beat the force of the waves, shivaji had constructed 3 mighty defense walls parallel to foundation of fort.

The zigzag defense wall of the fort is between eight & ten feet in width. To maneuver the fort as well as war materials two subsidiary fortress were built to the south of the entrance. Two watch towers were also constructed within a distance of half a mile. Elaborated & concealed arrangement are noticeable along the wall to ensure the rapid movement of the materials. Although Kurte island is rocky area surrounded by sea water there are four sweet water wells in the fort. Three of them are known as Dudh Bav (Milk Well), Dahi Bav (Curd Well) & Sakhar Bav (Sugar well), All of them had sweet water even though island is surrounded by sea water is veritable miracle in the fort. During Shivaji’s days, there were about 150 houses inside the fort. On western side of the fort there is dungeon (Subterranean place of confinement) for prisoners. More than a dozen water closets are also provided for the use of the people. In order to safety of the residency in rainy season, the slope of the inner floor in the fort inclined toward the defense wall. In addition with 50 ft watch tower to the south there is also a flag post stands. It is said that in old days a flag was hoisted on the height of 228 ft. The concept of the fort construction is entirely Shivaji’s thought. Hiroji Indulkar supervised the entire work. A dome shaped construction on north sided rampart of the fort contain impression of Shivaji’s right hand & left foot. The home warning was performed on Friday, March 29, 1667 where Shivahi was present. A small palace was also constructed in the fort for stay of Shivaji.

Shivaji’s temple is the main temple in the fort. It is only one of its type in the country. This temple was built by Rajaram which was extended with construction of outer hall by Shahu. It has an idol of Shivaji seen without beard & mustache. The legend behind this idol says that Rajaram requested Shivaji & draw a portrait after the death of Shivaji’s mother, Jijabai. That time as a customary Shivaji shaved off his beard & mustache. With this portrait Rajaram ordered an idol to sculpt.

The fort has a Shiv temple known as Amriteshwar temple. A little ahead from the Shiv temple there is a Bhavani temple with Goddess Bhavani idol installed in Madev temple also has a shiv lingam installed in it. A legend has at that there is an underground tunnel in the fort to effect emergency exits. To escape attack from Shahu , Tarabai came to the fort Sindhudurga in 1706.

The dry area in south is only an opening to the fort known as ‘Ranichi vel’, where Tarabai used to bathe.. Because of the sea water all around the land inside the fort is unsuitable for cultivation. Only vegetables re grown there. The land now mostly belongs to private owners. There are some 300-400 coconut trees at present. One such tree with twin branches , indeed , stands out. In July 2002, a part of the wall admeasuring 10 meters in length & 8 meters in height gave way. Today Sindhudurga fort has only 10 houses having some 20 people.

Fort is just 1 Km away from Malvan jetty. Small safety boats with outboard machines are used for public transportation. Maximum 20 tourist can be adjusted in a boat. Ticket fare is Rs 27 for adult & 14 Rs for Child including return journey. 1 hr is given to the tourist for excursion in the fort.

The boat ride to the fort is quite playful, but it is easier if you are visiting during tourist season from 8 A.M. to 6 P.M. daily. 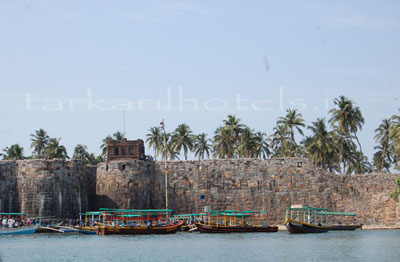